The Old Wife is at Five Islands Provincial Park. One of the most striking coastal vistas in Nova Scotia, and one of the best exposures of a monumental event in Earth history – the breakup of the supercontinent Pangea 200 million years ago, and birth of the modern continents and Atlantic Ocean. As Pangea ripped apart, the greatest outpouring of lava in Earth history gave rise to one of the Five (or Six) mass extinction events in the history of Life, wiping out the competitors of the dinosaurs and ushering in the true reign of the famous reptiles. The dark rocks are basalt – cooled lava – and the red rocks below are the sediments swept by rivers and winds in the rift valley 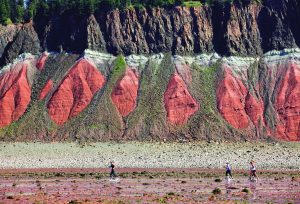 Great news Nova Scotia on reaching Phase 2 of our re-opening plan! The Cliffs of Fundy Geopark looks forward to welcoming visitors to a variety of community events, activities, and guided tours. We will be posting our schedule for the coming months in the next few days. Follow us on Facebook and Instagram and check out our website at fundygeopark.ca/.#cliffsoffundy ... See MoreSee Less

Fundy Discovery Site is now open 9 a.m. to 5 p.m. seven days a week. Come watch the bore, have a picnic, let the kids play in the sand kitchen, cycle or walk the trails or just sit and watch the sunset. Life is good on the river. fundydiscovery.ca/#cliffsoffundy ... See MoreSee Less

Visit the Age of Sail Museum when you are in the Cliffs of Fundy Geopark!#cliffsoffundy ... See MoreSee Less
View on Facebook
· Share

National Indigenous History Month:To celebrate National Indigenous History Month, we want to take you on a special virtual tour to some of our favorite local sites through the eyes of Mi’kmaw traditional knowledge holders and elders in this area.This Tuesday’s episode from Sa’qewe’ki’k kikmanaqi’k wikultisnu’k tett: Ancestors Live Here – a project documenting culturally significant locations throughout Mi’kmaki, transports us to Partridge Island, or Wa’so’q (meaning heaven). Gerald Gloade explains to us how this important site has ecological knowledge encoded in oral legends that were passed down generations. We have been making our way West to East through the zone this Geopark represents. This video series was created by Mi’kmawey Debert Cultural Centre (@mikmaweydebert). This is one of many docuseries they have made collecting oral histories in this region. www.mikmaweydebert.ca/ancestors-live-here/ The third episode is at Wa’so’q: Heaven also known as Partridge Island.- vimeo.com/87139846 ... See MoreSee Less

This is "Wa'so'q" by Mi'kmawey Debert Cultural Centre on Vimeo, the home for high quality videos and the people who love them.

Great news Nova Scotia on reaching Phase 2 of our

We are so excited to share with you that the Fundy

An incredible photo shared with us of Bill from Sp

Looking for your next day trip? The Eatonville Da

Have you taken photographs in the Geopark? Do you

The Cliffs of Fundy Geopark stands in solidarity w

We are a little late posting.. but Biological Dive