Our pathways and roads often follow the land that has been shaped by geology: so it is for the path of Highway 2 north of Parrsboro, which follows a cleft in the Cobequid Hills formed by glaciers more than 10,000 years ago. At Lakelands, the landscape looks as if huge loads of gravel were dumped by the side of the Hebert River – and so it was. As the glacial ice melted, it left behind hummocks of gravel called kames, on which blueberries now grow.

Geological Formation: Kame fields
Age: Quaternary (circa 10,000 years ago)
Directions: Head north from Parrsboro on Highway 2 past the intersection with Highway 209 to Lakelands. The rolling, gravelly hills of blueberry fields on both sides of the road are glacial kames. 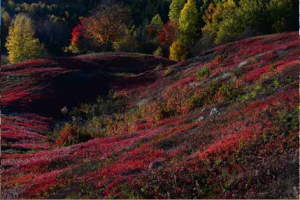 Does this cold weather have you wishing for summer? Check out Fundy Trail Campground and Cottages. ... See MoreSee Less

Fundy Trail Campground & Cottages – Beautiful campsites and cottages right next to the Bay of Fundy!

We offer seventy four campsites from secluded wilderness tenting along a babbling brook to full service sites with hookups for your RV or trailer.
View on Facebook
· Share

We love this shot by @soulful_photography_by_geral

How do you embrace winter? There are so many amazi

A beautiful shot of Spencer's Island in the snow.

Our calendars are on sale! $10 no tax and free shi

It might be cold, but it's beautiful outside! Shar

The Cliffs of Fundy Geopark has scheduled a number

It has been beautiful along the Cobequid Trail in

#NationalBirdDay #BirdDay 🕊 According to Born

Our parrsboro office at 223 Main St will be open t

Its Christmas Bird Count week and we'll be watchin