Distant enough to be somewhat mysterious, Isle Haute is shrouded in sea mist and legends and is a rich sanctuary for seabirds and seals.  Known as Maskusetkik by the original Mi’kmaq people, it was later referred to as Isle Haute by Samuel de Champlain who visited in 1604.  Haute is French for high in reference to the cliffs of columnar basalt which tower 100 metres from the waters of the bay.

Geological Formation: North Mountain Formation
Age: Late Triassic-Early Jurassic (circa 200 million years)
Directions: Isle Haute lies 8 km off Cape Chignecto in the Bay of Fundy and can be accessed by boat for day use only. Isle Haute is administered by the Canadian Wildlife Service of Environment Climate Change Canada for the creation of a National Wildlife Area.  Best experienced from the water, visitors to the island should be mindful of disturbing wildlife especially during the nesting season. 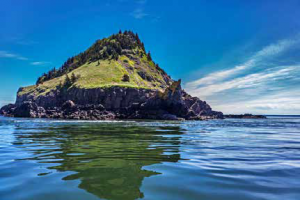 Today is the last day of official Mi’kmaw Heritage Month but every month is Mi’kmaw heritage in Cliffs of Fundy Geopark. On the left of the poster is a traditional Mi’kmaw motif of the two curves - this is what inspires our Geopark logo. ... See MoreSee Less

Come out to Colchester-East Hants Public Library next Wednesday to check out this awesome talk!"The Amazing Geological History of Nova Scotia: the Story Beneath the Scenery" with Dr. Sandra Barr Join us for a discussion with Dr. Sandra Barr, a professor in the Department of Earth and Environmental Science, Acadia University, as she talks about the fascinating and unique history that lies beneath our feet and on our rocky shores. The rocks and fossils around us tell a fascinating story of the origin and evolution of our Maritime Provinces. 🗓️ Wednesday, November 2⏱️ 6:30pm-7:30pm📍 Truro Library ... See MoreSee Less

October 6th is #GeodiversityDay !! International Geodiversity Day is a worldwide celebration to promote the many aspects of Geodiversity around the world! What is Geodiversity? It is everything around you that isn't living! The rocks, minerals, fossils, and landscapes that make up the world around you! For Geodiversity Day 2022, Cliffs of Fundy Geopark teamed up with Stonehammer UNESCO Global Geopark and Géoparc mondial UNESCO de Percé to highlight some of the incredible Geodiversity in Atlantic Canada! Follow Geoscientists from three Canadian Geoparks for a walk through time! 🌎🌍🌏A huge thanks to Catrina at Stonehammer for editting this video together in time and to Max at Percé for initiating this collaboration! For more information about Geodiveristy Day, check out www.geodiversityday.org/ ... See MoreSee Less

Oceans North and CPAWS invites you to a special ev

Have you heard the story about why the Fundy Tides

Calling All Hands on Deck! The Not Since Moses Not

Join Cliffs of Fundy Geoscientist and Age of Sail

Return of the Fundy Food Trail: On now until Augus

Return of the Fundy Food Trail: On now until Augu

Happy #fundyfoodtrail everyone! Have a safe and ta